Using Manganese in Pottery: All You Need to Know

Manganese is a mineral that is found in many foods, and manganese dioxide (MnO2) is an inorganic compound that actually has many uses in pottery. In fact, MnO2 has many uses, one of which is water treatments for various cities and locales.

But using manganese in pottery encompasses different uses, as any potter can tell you. In pottery, manganese is used to stain clays (when black is used) and to create a decorative effect, mostly the speckling of an item. So let’s take a closer look at manganese and how it is best used in pottery.

There Are Many Applications in Pottery

In addition to staining clays and creating a decorative “speckling” effect, MnO2 is used as an inorganic pigment in ceramics and glassmaking. It is essentially a colorant that is used in glazes and bodies. It can produce colors such as browns, blacks, and purples. If you use smaller amounts of MnO2, they will easily dissolve in most glaze melts.

That said, once you reach the 5% threshold, the manganese crystallizes and precipitates. So if you use large amounts of manganese — for instance, 20% or more — you’re more likely to end up with a metallic surface.

Manganese can also produce coffee-colored browns when used with tin and in glazes below 1976 degrees Fahrenheit. However, suppose you get above 1976 degrees. In that case, half of the oxygen will disassociate and produce MnO, which instantly reacts with silica and produces beautiful violet colors, as long as there are no alumina and browns in its presence.

Use this manganese dioxide to stain clays (using black) and to impart fired speckling (as a decorative effect). Perfect for use in an oxide wash or glaze recipe.

If you click this link and make a purchase, we earn a commission at no additional cost to you.

Manganese and its Use in Glazes

Manganese is a metal ore that is omnipresent on earth. Potters use manganese as a glaze colorant, which yields hues that range from brown to pink and purple at all temperatures.

It is also used as a body colorant and a surface colorant and can be used either alone or as a main ingredient in a slip. When used in glazes, manganese behaves refractively and stiffens the melt.

At 1976 degrees Fahrenheit or higher, there is a chance of blistering and ruining the surface of the glaze, which is why it should not be used at temperatures this high. For the best results, utilize temperatures below 1976 degrees.

Manganese is a fine particle ceramic colorant that usually produces browns in glazes but can produce purples when used with cobalt or alkaline fluxes. Keep in mind that manganese dioxide can be toxic in both dry and suspended forms.

In dry form, it can cause significant breathing problems, and in suspended form, it can be absorbed through the skin and cause a host of neurological problems.

You should therefore vent your kiln to the outside, removing any gasses emitted during the firing process. In clay, manganese can also be harmful to the potter.

Some potters use manganese granular in bodies to create a speckled fired surface. If you stand downwind or near an outdoor raku kiln laden with manganese-saturated glazes, it can be a serious health hazard; in fact, this has even caused some potters to be poisoned.

The best solution is to make sure that you adhere to all of the instructions and never stray from any of them. However, if you are careful and learn what to do and what not to do, you should be safe working with manganese.

What Exactly is Manganese?

Manganese is a mineral found in many different foods, including soybeans and other legumes, seafoods such as mussels and clams, leafy vegetables, coffee and tea, and even whole grains.

Drinking water usually contains small amounts of manganese, and the metal is mined in areas such as Australia, Africa, and China. Some manganese nodules have even been found on some ocean floors.

Manganese dioxide, or MnO2, is an inorganic compound that is black or brown in color. It occurs naturally as a mineral known as pyrolusite.

In addition to pottery, manganese dioxide is used as part of dry cell batteries and animal feed and as a colorant in manufacturing bricks and paving stones. MnO2 is a powdered pigment used to create colored clay products meant to be gray, black, blue, and of course, brown.

Both ceramic and glassmaking tasks can use manganese dioxide, which is also used in the health and the, oil and chemical industries.

Back to Uses in Pottery

In pottery, manganese dioxide is used mostly to make products look more decorative and to stain them certain colors. When you look at manganese browns, they are a little more pleasant-looking than your iron browns.

If you mix it with copper oxide, you can even get a gorgeous metallic bronze color. You get a deep violet color when mixed with small amounts of cobalt oxide. When you use copper in crystalline glazes of 2% to 5%, you can get a lot of other very interesting colors.

Pink glazes are obtained when copper oxide is used; the copper oxide will cause a pink blush on surrounding pots in reduction.

This is because copper oxide is so volatile. In addition, you can easily get glazes that are dark brown or even a brownish-black color when high-fire glazes with a lot of iron content are fired in reduction. Even reoxidation can occur and turn many areas a red color or give it a red highlighted look.

Manganese does indeed have many uses in pottery, but its most important functions are to give the item a decorative “speckled” look and to turn the item a certain color. It can be used in clays, glassmaking, and ceramics, and while you have to be careful with the product, it is easy to learn just how to do that. As a result, manganese is a very versatile product that many potters have come to depend on to create their masterpieces.

David Miller is an amateur potter that started as a hobby nearly 7 years ago. His mission is to share tips, tools and ideas he has learnt along the way. When he's not in the office, he can typically be found in his studio, a.k.a. his shed, creating, experimenting, and generally making a mess. 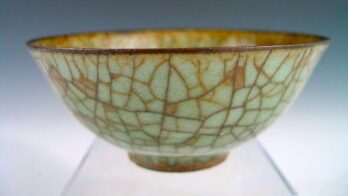 Is Crazing in Pottery Bad? – Causes & How to Fix it

Crazing is what happens to pottery that makes its surface look like a web of tiny cracks. But is crazing in pottery bad? 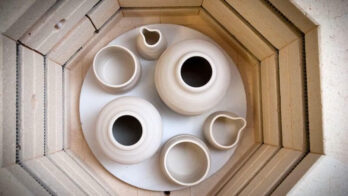 Does Porcelain Need to be Fired? – Everything You Need to Know 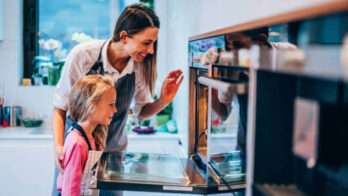 Is it Possible to Fire Pottery in Your Oven at Home?

Interested in trying your hand at firing pottery in your oven at home? This guide will give you tips and tricks on how to do it correctly.